On World AIDS Day, it’s important that we elevate the stories and experiences of trans and gender nonconforming people living with HIV/AIDS. In research and advocacy, our community is routinely underrepresented despite being more at risk for contracting the virus. Once trans people know their status, we continue to lack access to affirming and adequate healthcare. With out Positively Trans campaign, we elevate and invest in trans leadership to shift the narrative on what it means to live with HIV and lead healthy, fulfilling lives.

View our research results from the first Positively Trans Report: 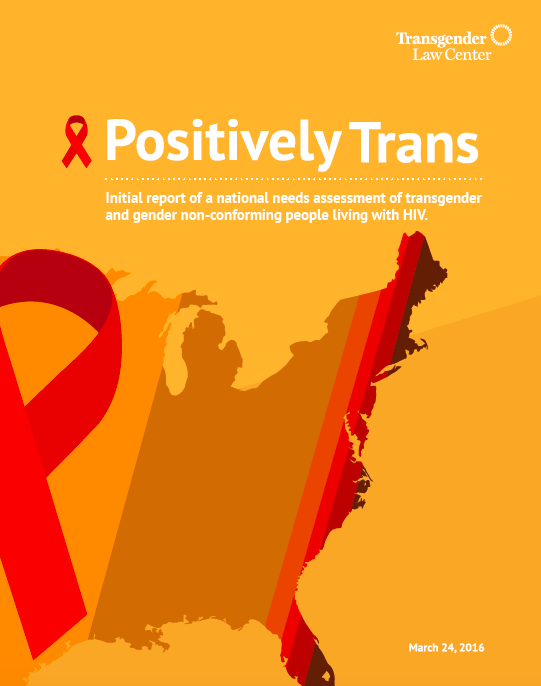 Click here to read the preview of the report!

In 2015, Transgender Law Center launched Positively Trans as a project focused on to develop self-empowerment and advocacy by and for transgender people living with HIV.  Positively Trans operates under the guidance of a National Advisory Board (NAB) of transgender people living with HIV from across the United States; the NAB is primarily composed of trans women of color who are already engaged in advocacy in leadership roles in their local communities.

Recent studies indicate that transgender people, especially transgender women of color (TWOC), experience disproportionate economic marginalization, homelessness, and stigma and discrimination in healthcare access and provision; harassment and violence at school; and police abuse, as well as physical, sexual and physical violence. In the face of these systemic threats and barriers to autonomy and wellbeing, the impact of HIV on the transgender community cannot simply be addressed by programs that work to affect individual behaviors; we must address the systemic barriers our community members face face—and the complex interactions of these systems—to reduce HIV risk and increase access to care and other resources for trans people living with HIV (TPLHIV). We believe that effective HIV responses for transgender people must include a combination of leadership development, community mobilization and strengthening, access to quality health care and services, and policy and legal advocacy aimed to advance the human rights of the community.  Furthermore, we believe that an effective HIV response for trans people must center the leadership, voices, and experience of TPLHIV particularly trans women of color.

In order to identify community needs and advocacy priorities, we conducted a needs assessment in the summer of 2015. The needs assessment was released online and made available across the U.S.  Key questions focused on barriers to health and well-being for transgender people living with HIV and on their legal and health priorities. This report describes the responses to a small subset of those questions. We made the survey available online in English and Spanish; 80% of complete responses came from the English language instrument and the remaining 20% came from the Spanish language instrument. Recruitment took place through existing networks of transgender people and people living with HIV, and through clinics serving transgender people living with HIV. Responses were limited to people living with HIV in the U.S. whose sex at birth is different from their current gender identity. The project was reviewed and given exempt status by the Eastern Michigan University Institutional Review Board.

Based on responses to several items on the survey instrument, we expect that the survey mostly attracted respondents who already have access to medical care. As a result, the responses may underrepresent the experiences of those who are more isolated. Because respondents were recruited through existing networks and not randomly selected, the results cannot be interpreted as representative of all transgender people living with HIV in the U.S. Instead, these results should be understood as illustrating the experiences and priorities of transgender people living with HIV and as providing a starting point for further engagement. More than 400 people responded at least in part to the survey, with complete responses coming from 157 respondents. The analysis we provide in this report contains data only from the set of complete responses. The majority were female-identified U.S. citizens making less than $23,000 per year. More than 40% had been incarcerated in their lifetime and 42% currently live in the South. The median length of time since identifying as transgender/gender non-conforming was 5 years greater than the median length of time living with HIV, suggesting that transgender and gender non-conforming people face unique risk and vulnerability to the HIV/AIDS epidemic. Our full report contains a summary of demographic information for respondents who submitted complete surveys. Descriptive statistics of respondent demographics suggest that the survey oversampled whites and undersampled young people and people living in the Northeast. [/toggle] Creating gender affirming and non-discriminatory healthcare facilities and addressing HIV-related discrimination were the top health and legal priorities for respondents. Many respondents expressed concerns about hormone replacement and antiretroviral therapies and their side effects for transgender people. Ensuring support for mental health and recovery from trauma and for personal (self) care were selected as top critical priorities for transgender people living with HIV.

Participants were asked to select their top five health concerns. Figure 1, above, shows the items ranked by percentage of respondents who indicated each item was among their top 5 concerns. Not listed are: dental care (35%), interaction between hormone therapy and anti-retroviral therapy (35%), complications from silicone injections (26%), pre-exposure prophylaxis and post-exposure prophylaxis (16%), substance abuse (9%), and reproductive health (8%).

Not listed in Figure 2 are: dealing with law enforcement (including addressing a past criminal record) (38%), immigration (17%), and family law (including parental rights) (14%). We hypothesize that immigration issues rank higher among Asian/Pacific Islander and Latina/o respondents; further analysis will determine this.

The concerns about discrimination were coupled with the belief of many respondents that they were not knowledgeable enough about their legal rights. Together, these two sets of responses highlight a critical need for rights-based trainings and advocacy work specifically for transgender people living with HIV.

Barriers to Health Care and Well Being To better understand the healthcare barriers that transgender people living with HIV face, respondents were asked if they had ever gone six months or longer without medical care since their HIV diagnosis. 41% of respondents (n=65) indicated that they had.

Respondents who had been incarcerated or detained were significantly more likely to have gone without medical care for more than 6 months (51% of those detained versus 35% of those never detained, p<0.03).

The respondents who had gone without care for more than six months were asked a further question about why this happened. The most common reason respondents reported for going without healthcare for more than 6 months was previous or anticipated discrimination by a healthcare provider (29%). Other reasons included having too many other things to deal with (20%), economic barriers (health care costs, transportation) (17%), not having a health care provider (12%), and fear that someone they knew would see them (8%),

Many respondents indicated the previous experience or expectation of mistreatment by providers. The distance that can occur between many transgender people living with HIV and their providers is at least partially demonstrated by the low number of respondents (9% to 17%) who indicated that they had providers who shared their experiences as transgender or gender non-conforming people.  The clearest barrier to health and well-being reported in the survey was the outright denial of health services. Respondents indicated that they had been denied health care because they were transgender or gender non-conforming (31% had this experience) and because they were HIV-positive (20% had this experience). These high numbers reflect violations of respondents’ human right to health care.

Denial of care, whether because one is transgender or gender non-conforming, because one is living with HIV, or both, has a stigmatizing effect that goes beyond the interaction itself.  Transgender respondents living with HIV were significantly less likely to receive regular HIV care if they previously had been denied care because of their gender identify or HIV status.

In future analysis, we will consider the impact of health care discrimination on other health and quality of life outcomes the survey measured.

In addition to descriptive statistics of areas of the needs assessment not covered in this initial report, future reports will include statistical inference to determine what, if any, relationships exist between variables measuring health outcomes, stigma, experiences of violence, viral load suppression, immigration, and participation in social change activism.

The work of the National Advisory Board of the Positively Trans and the responses to the survey by transgender people living with HIV across the U.S. demonstrate immediate and critical needs to protect transgender health and access to legal rights. The following recommendations are not listed in priority order as each will be required to be put into place if ending barriers to care and access to legal rights are to be a reality for transgender people living with HIV.

The following programs and initiatives are required:

Below are videos from members of our Positively Trans National Advisory Council: