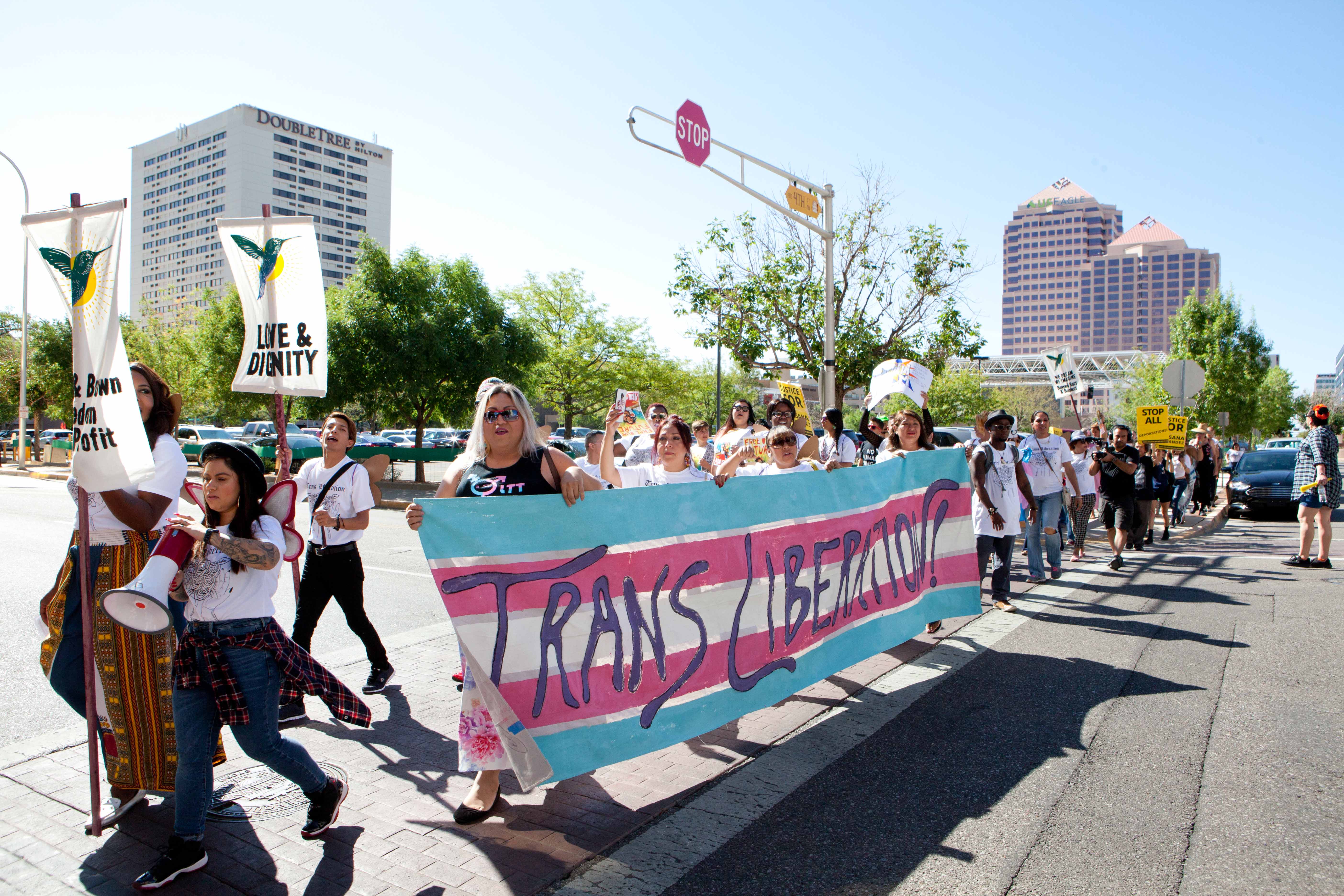 Today the Transgender Law Center (TLC), Ballard Spahr LLP, and the Rapid Defense Network filed a complaint demanding the release of all transgender people in civil immigration detention. This action must be immediately taken so transgender detainees, a population that has been rendered medically vulnerable, may take precautions against the COVID-19 pandemic. The lawsuit makes it clear that the current conditions in ICE detention centers violate transgender detainees’ Fifth Amendment due process rights as well as the Administrative Procedure Act.

Since ICE first reported COVID-19 infection in one of its detention centers on March 19, outbreaks have spread to at least 32 detention centers across the country. ICE has publicly reported 250 confirmed cases of COVID-19 in those facilities, including 220 detainees and 30 staff members. At least ten facilities where transgender detainees are housed are experiencing reported outbreaks with 82 detainees and 4 staff members infected. Advocates warn that the numbers will continue to increase due to ICE’s failure to provide adequate medical care, a lack of adherence to CDC and other expert guidance, and the crowded and unhygienic conditions of detention facilities.

“A humane response to address COVID-19 is possible: release transgender people that are currently in ICE detention so that they can receive care and safety in community,” said Lynly Egyes, TLC’s Legal Director. “ICE is responsible for the health and well-being of the people in its custody and to follow CDC guidelines while people are in detention.  However, ICE is failing. This puts everyone, especially transgender people, at risk. We have the resources to safely house people who are released. Now we’re asking the court to compel ICE to do the right thing.”

“Transgender people who are being held in ICE detention are recklessly exposed to COVID-19, and we demand their immediate release.” said Gregory Copeland, Legal Director at Rapid Defense Network. “The Rapid Defense Network is working to ensure that everyone is released from immigration detention – facilities that were completely inadequate before the pandemic and now death traps for the innocent people locked inside.”

“Transgender people in civil immigration detention not only have to endure the unjustifiably harsh conditions facing everyone in Immigration and Customs Enforcement custody, they often experience inadequate medical care, harassment and even violence because of their gender identities,” said Matthew Kelley, a lawyer at Ballard Spahr.  “My Ballard colleagues and I are honored to fight for their release during the COVID-19 crisis which exposes them to life-threatening conditions.”

The class being represented in this lawsuit includes all transgender people currently in ICE custody and those who may be detained as the COVID-19 pandemic rages on. Thirteen named plaintiffs from six different countries who are currently locked in ICE detention centers throughout the country represent the class. Many plaintiffs fled their home countries due to fear of violence and persecution because they are transgender and were seeking safety and asylum in the U.S. at the time they were detained. These plaintiffs report dangerous conditions directly related to the global health crisis of COVID-19 including a lack of social distancing, a lack of access to daily medications and vital health information, and irresponsible and inadequate medical care.

Trans detainees are more likely to have underlying health conditions – such as diabetes, high blood pressure, and immune suppression caused by HIV or viral hepatitis – that put them at high risk for developing the most serious complications from COVID-19. Trans detainees are also far more likely to suffer from mental health issues such as depression, anxiety and post-traumatic stress disorder, rendered medically vulnerable by a cruel detention system that routinely denies them access to life-saving medication, affirming surgery, or even appropriate housing based on their gender identity.

“Living in detention is painful enough as it is. I can’t even imagine the additional fear of having COVID-19,” said Chin Tsui, a trans migrant who recently returned home. “I’ve witnessed too many transgender people pass away in my lifetime from this society’s neglect. I beg you to support our campaign to free transgender migrants in this horrible time, so there will be no more deaths.”

The named plaintiffs in the lawsuit include:

LRAP, who is detained La Palma Correctional Facility in Arizona. Although as of April 20, 2020, ICE reported 13 detainees at La Palma had been diagnosed with COVID-19, LRAP reports that she has not been notified that the virus has been found at the facility and facility staff have not provided information about the pandemic except for signs posted on the walls, which are in English.

RH, who is detained at Caroline Detention Facility in Virginia suffers from asthma, which requires her to use an inhaler three times a day.  She also takes hormones as part of her gender affirming care. Upon being detained, her hormones were changed, and she experienced side effects including severe headaches.  Because of her asthma, she is at high risk for severe illness or death if she contracts COVID-19. There are 35-40 people in her dorm, and she has experienced harassment from the people with whom she is detained. These conditions have made it impossible for her to practice social distancing.

KM, who is detained at Nevada Southern Detention Facility, has reported that staff at the facility sometimes do not provide M, who is living with HIV, with her antiretroviral medication, requiring her to miss doses. She has observed other detainees in her pod showing possible COVID-19 symptoms such as coughing and fever; those detainees were sent to medical care but returned to the general population.

MMS-M, who is detained at the Winn Correctional Center in Louisiana. She has been unable to obtain gender-affirming hormone treatment while in ICE custody, and because of her fear and anxiety from being housed with cisgender men, MMS-M has been placed in segregation, which is exacerbating her mental health issues. She reports that nurses at Winn do not wear gloves or masks, and neither medical staff nor guards have provided her with much needed information about COVID-19.

“For the last three years Santa Fe Dreamers Project has supported hundreds of transgender women in immigration detention and sadly seen the death of two beloved women,” said Allegra Love, Director of the Santa Fe Dreamers Project. “The only possible conclusion that we can make as witnesses to their horrifying experiences is that there is simply no way ICE can safely detain trans individuals. Now during this global pandemic, the only possible thing we can do, knowing what we know and seeing what we’ve seen, is plead with the court to order their release before we find ourselves facing yet another tragedy.”

ICE detention centers were already plagued by chronic, well-documented failures to provide proper medical care to transgender detainees. These existing problems have only been exacerbated by the COVID-19 pandemic and pose additional enhanced risk of infection, disease and death for transgender detainees. In September 2019 TLC, Black LGBTQIA+ Migrant Project (BLMP), Center for American Progress, and dozens more LGBTQ, civil rights and immigration justice organizations filed a complaint with DHS and its inspector general’s office over ICE’s failure to provide adequate medical and mental health care to LGBT and detainees living with HIV, citing the mistreatment of 19 current and former ICE detainees, most of whom are transgender.

“Trans people deserve the freedom to thrive,” said Ola Osaze, Director of the Black LGBTQIA+ Migrant Project housed at TLC. “In the midst of an unprecedented and growing global health what we’re asking the court for is the ability to survive. This is not only a public health issue but one that has potentially deadly consequences for the tens of thousands of people detained in ICE facilities as well as those that work in these facilities.”

“Everyone deserves to be cared for in a crisis,” said Úmi Vera, Campaign and Organizing Director of Familia: Trans Queer Liberation Movement. “The spread of COVID-19 that is happening in detention centers across the country is an unspeakable and extremely preventable tragedy, but it’s one we can put an end to now. Every single decision maker who has the power to release people from immigration detention must take action.”

Read the complaint and TRO here or below:

Please note that our capacity to answer calls is unfortunately limited; we encourage people to call between 10am and 5pm Pacific time and/or write to us at the PO box above